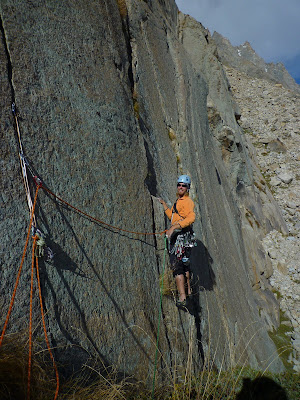 Maestro himself stepping off the ledge and starting the 2nd (Yosemite-like) pitch of the BIG DIHEDRAL.

We climbed following routes on the lower cliff of Chota Dara crags (approach around 10-15min, elevation c.3800-4100m/ from base to top). This lower cliff has at least 2 other routes, but on the right side of the wall. Upper Chota Dara wall, which is higher and steeper is supposed to be undeveloped, with plenty of good looking non-vegetated splitters. Rock quality generally here is very good, only in some places vegetated, but the more higher you got, more you enjoyed.

The following routes might have been done before, but we didnt encounter any traces or information was not available, except the direct intro pitches to the BIG DIHEDRAL, where somebody had rappelled off from a red prussik, supposedly due to loose rock. Those fragile flakes do not exist anymore (of course they do but below the wall now). We dropped some hundreds of kilos of loose stone from that point. They did make some horrendous noise though. First we tried this same introduction pitch (following the huge flake all way) to the big dihedral, but we retreated, because of this loose rock. But now after dropping the most of it, this route which follows a huge flake is ready for its ascent!

Top of pitch 3 is a single 8mm bolt, which was placed for a rappel (If somebody feels that was unethical, chop it.) That marks the high-point of our attempt to climb the biggest feature of the wall, the BIG DIHEDRAL, where pitches 1 & 2 (peanut dihedral and Yosemite crack) were truly superb climbing!!! Abseiling from high point to ground is c.65m, which proved no problem with double 60m ropes. Actually the big dihedral was climbed, but once under the big roofs, climbing became more steep & vegetated, and would have taken hours to clean on lead. Before gear could be placed, vegetated crack had to be cleaned on pitch 3, resulting to a shorter pitch of climbing, which took almost 2 hours. 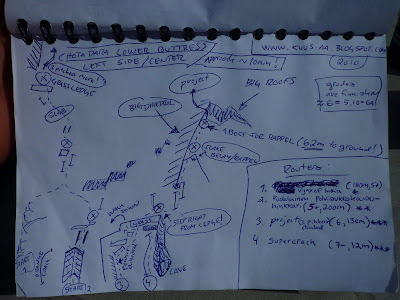 Photo-topos are clear and in fashion nowadays. 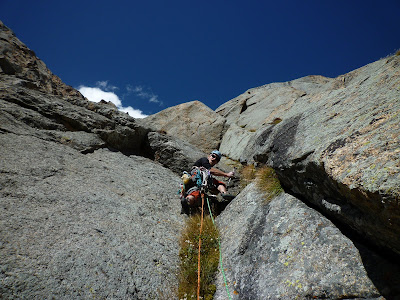 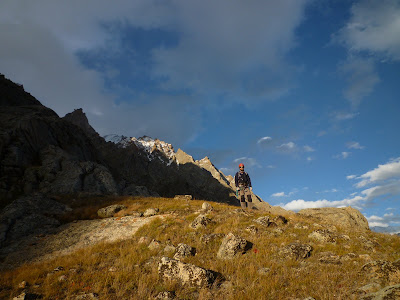 On the top of lower crag, after finishing the route: polvisukkahousuhinkkari. A possible FA again, happy days!

The true GEM was a short but technical First ascent of the SUPERCRACK by Samppa. A definite classic, without a question! Peanut dihedral 10m to the left from Supercrack is *** as well, but graded FIN 5 a bit sandbaggish. Descent from top of both routes (c.15m) is a grade 3 scramble.